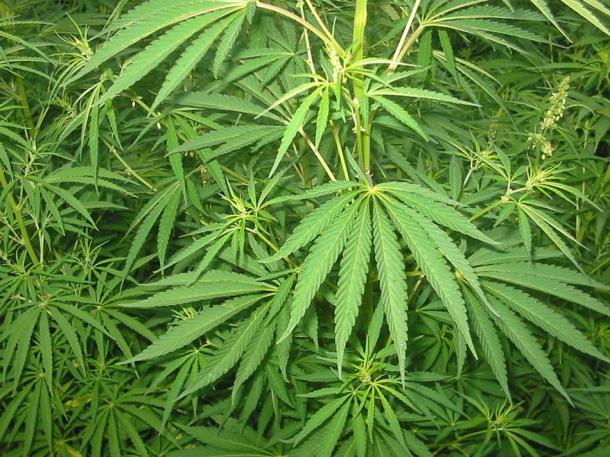 Cannabinoids THS and CBD
The harrowing story of young Billy Caldwell’s epilepsy and UK Home Secretary’s subsequent decision to review the official use of Cannabis for medicinal use, (19 June), has highlighted the potential medicinal properties of the Cannabinoids THS and CBD extracted from the Marijuana plant or synthesized.
In the event, Oxford University’s 16 March announcement of a £10M medical Marijuana Research programme sponsored by Kingsley Capital Partners through their new company Oxford Cannabinoid Technologies, (OCT), was both timely and prescient.
CBD is thought to give pain relief and reduce anxiety while THS gives the ‘high’ that recreational Cannabis users seek. It is this ‘high’ that has resulted in Cannabis being labeled a ‘controlled’ narcotic drug in UK and classified by the Misuse of Drugs Act, 1971.  Additionally the Misuse of Drugs Regulations Act of 2001 placed Cannabis in the category for substances with no medicinal value.
Marijuana has been cultivated since Neolithic times and Cannabis used in folk medicine for at least 3,000 years. The earliest written reference to Cannabis as a healing agent was in the 15th century BCE Chinese Pharmacopeia Rh-Ya. More recently in modern times during the 19th and first decade of the 20th century Cannabis was prescribed in USA and UK for a number of ailments.  It was first labelled as a dangerous drug by Massachusetts in 1911 and thereafter elsewhere in USA. It was added to the UK’s Dangerous Drugs Act in 1928.
It was not until 1996, when California became the first US State to re-legalise Marijuana for medical use, that cannabis began its long journey back as a responsible treatment therapy for cancer, AIDS, and other diseases and disorders.
As a consequence of marijuana’s illegal narcotic drug status throughout most of the 20th century, both scientific and clinical research into the medicinal benefits of Cannabinoids was severely restricted.  However, recent and now accelerating trends in Cannabis legislation have at last made it possible for scientific and clinical researchers to study the medical properties of Cannabinoids as possible antitumour agents as well as their expected therapeutic treatment applications in cancer and other diseases and disorders.
The Oxford research project will focus on two of the 100 or so Marijuana Cannabinoids for their anticancer and therapeutic potential in treatment of cancer, inflammatory diseases, pain management and neurological disorders.
In USA the Federal Drugs Administration, (FDA), approved two synthetic cannabinoid drugs (dronabinol and nabilone) for the treatment of nausea and vomiting induced by chemotherapy in those cancer patients who have not responded to standard therapy. Both are available in UK on adult prescription only.

Inhaled Cannabis
While there have been a few uncontrolled clinical trials on the use of inhaled Cannabis in cancer patients, the data has been insufficient to provide any acceptable assessment of its beneficial use in chemotherapy induced nausea and vomiting, (N/V). There are however valid concerns about the adverse pulmonary effects of inhaled Cannabis since Cannabis smoke contains many of the same components as tobacco smoke which is a prime cause of lung cancer.

Illustration: American Heart Association
The majority of patients with the most common type of breast cancer do not benefit from chemotherapy after surgery according to a comprehensive study.
A decade long multi-center study by the ECOG-ACRIN Research Group, involving 10,273 women with early-stage cancer at 1,182 treatment sites across USA, Australia, Canada, Ireland, New Zealand and Peru, showed conclusively that chemotherapy was unnecessary in 70% of cases.
The Stage-3 Trial findings were published in the New England Journal of Medicine last week following the trial leader’s presentation to the American Society of Clinical Oncology (ASCO) annual meeting.
Unlike many published clinical trial results which require many years of further study before findings are confirmed and validated, this trial’s results will have an immediate impact on global treatment practice for early-stage breast cancer.
Dr. Alistair Ring, a consultant oncologist at the Royal Marsden NHS Hospital, London, was upbeat about the potentially immediate impact on breast cancer treatment in the NHS. “I think this is a fundamental change in the way we treat women with early-stage breast cancer and will lead to a considerable number of women no longer needing to have chemotherapy.”
Up to 5,000 women in UK could now avoid the harrowing side effects from the toxic drugs used in chemotherapy, if this life-changing refinement of early-stage breast cancer treatment is followed across the NHS.
Until now, post-operative treatment included hormone therapy plus chemotherapy for women diagnosed with early-stage HR-positive, HER2-negative, axillary lymph node-negative breast cancer. This therapy combination was administered to these patients to inhibit cancer recurrence.  However the trial showed that invasive disease-free survival after treatment was almost statistically the same, whether patients had the combination therapy or hormone therapy alone.
There is an additional bonus this refined post-operative cancer treatment of hormone-only therapy will have for healthcare systems around the world: lower costs!
The NHS is struggling with the spiralling costs of cancer drugs used in chemotherapy. These drug costs inhibit the ability of an underfunded NHS to adequately invest in other cancer services.
Further Reading
New England Journal of Medicine
Adjuvant Chemotherapy Guided by a 21-Gene Expression Assay in Breast Cancer
National Cancer Institute Press Release
TAILORx Trial result
ECOG-ACRIN Cancer Research Group
Multi-national network of participating institutions.
CBS News
Many breast cancer patients can safely skip chemotherapy, study finds.
BBC News
Cancer drugs price rise ‘costing NHS millions’
Posted by Unknown at 19:05 No comments:

41. Immunotherapy future for breast and other cancers 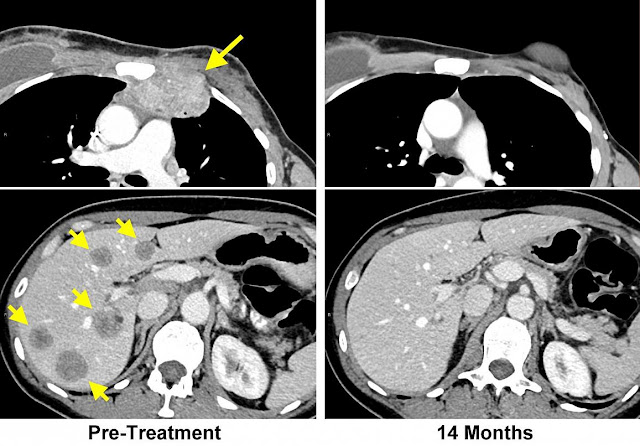 The US National Cancer Institute’s, ((NCI),  development of a novel approach to immunotherapy, reported in the June issue of Nature Medicine, has been given wide coverage in the British press. It is an important step forward in our understanding of cancer mutation and treatment.
The complex trial approach was in fact a modified form of adoptive cell transfer, (ACT), which has already been effectively used in in skin cancer treatment trials.
The treatment trial on a patient with late-stage breast cancer led to the complete cancer regression in the patient who had been  unresponsive to all other treatments. All of the patient’s cancer, which had spread to other parts of her body, disappeared after the treatments and has not returned more than 22 months later.
This was an innovative experimental approach for one very lucky 52-year-old patient who had not responded to hormonal and chemotherapy, and whose condition had deteriorated to a point that she was planning her death after the cancer had spread to her lungs and liver.
Extensive and time-consuming multi-centre trials must now be undertaken to prove the treatment’s efficacy before it can be made routinely available to treat late-stage breast cancer patients.
“This is an illustrative case report that highlights, once again, the power of immunotherapy,” commented Tom Misteli, Director of NCI’s Centre of Cancer Research, (CCR) at Bethesda.  “If confirmed in a larger study, it promises to further extend the reach of this T-cell therapy to a broader spectrum of cancers.”
CCR’s Dr. Steven Rosenburg, the clinical trial leader, commented on the broad potential of this experimental trial approach: “Because this new approach to immunotherapy is dependent on mutations, not on cancer type, it is in a sense a blueprint we can use for the treatment of many types of cancer.” 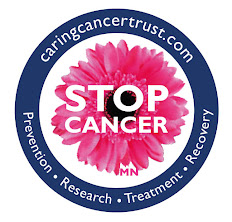